We went out and finished our morning rituals :) out in the dark, in open air, in the fresh nature. We then returned together, it was still dark, and the fear of not going far still lurked because we were always warned to be careful not to stray away because of the chances of encountering a wild animal. But my heart was still at the Santhana Mahalingam Temple where the cave was. I knew that it was some important place and some great Siddha who used to live in that cave. Soon, an early stray of light broke out and as we returned i just told the others to carry on and that i would come soon. i looked at the cave temple that was high and with torch in hand headed towards it. There was this fright on and often but something felt like going there and being there. i hurriedly took steps and began moving up and it was around 6 am and few people far away came out of their little home that was surrounded by barbed wire for protection from wild animals. That even gave me a little more scare. But then chanting, i proceeded and reached the place. By this time there was enough light and i could see that the room inside which the cave was, was locked. It did not matter as i just wanted to be around here. Moving a bit here and there, i saw some cattle sitting here. Then i sat on a cemented surface and closed my eyes. i spent some time there and it was not long before i had to fling open my eyes to some warm licks of a dog that was licking my ears. i sprung up in fright and then was happy to have company :) 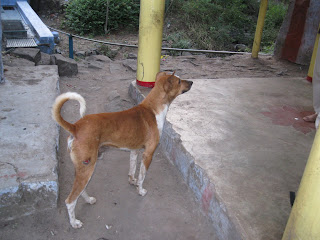 Later coming back home after a little research i found that this cave belonged to Siddha Sattanathar and that Shivalinga at the Santhana Mahalingam Temple next to this cave was the Siddha's Jeeva Samadhi!

Sensing that others would get worried and so thought i should leave and thanked the Siddha in front of the cave room and left. While walking down the fear still lurked me of going back alone and called the dog. He was prompt to come and believe it or not he assisted me till the Sundaramoorthy Swamigal Temple. My friends had already packed our bags and they had brought my bag too at this temple where puja was about to begin. After the puja, taking prasad, i offered it to my friend (dog) who ate it. While he ate i noticed an astonishing thing. This dog had a very small wound on it's thigh. Immediately i recognized it to be the same dog we had mysteriously met yesterday near the pool who had walked with us and assisted us. As soon as he ate the prasad he ran back to where he came from. There was another black dog that stayed with us. 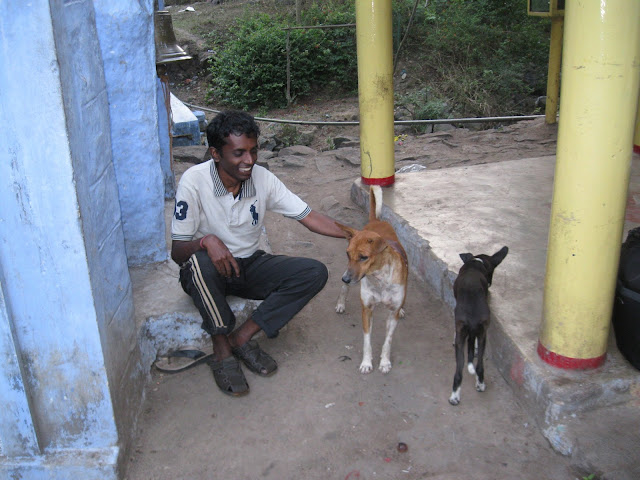 We then began our trip down the hill. The black dog also followed us. He was completely with us for a long time down hill. He was very loving and whenver we stopped, he also stopped and at times when we sat down, he also sat down, waiting for us to continue the walk. 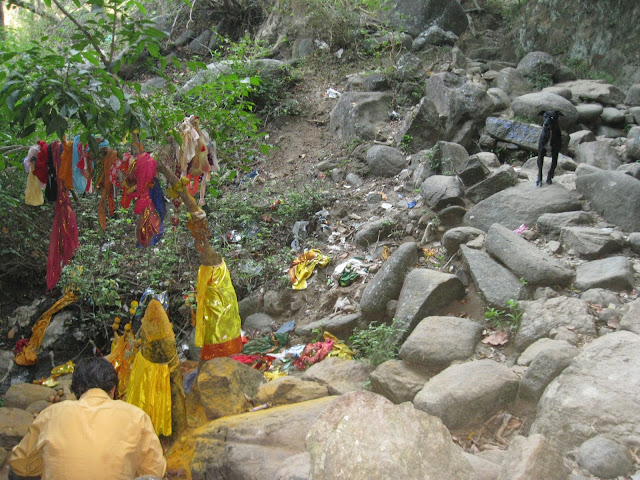 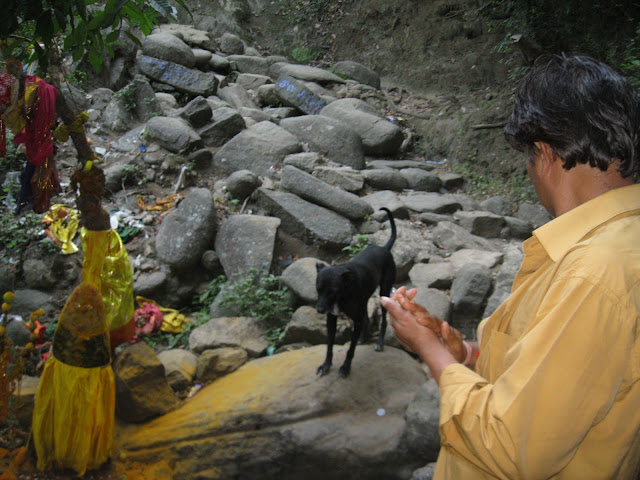 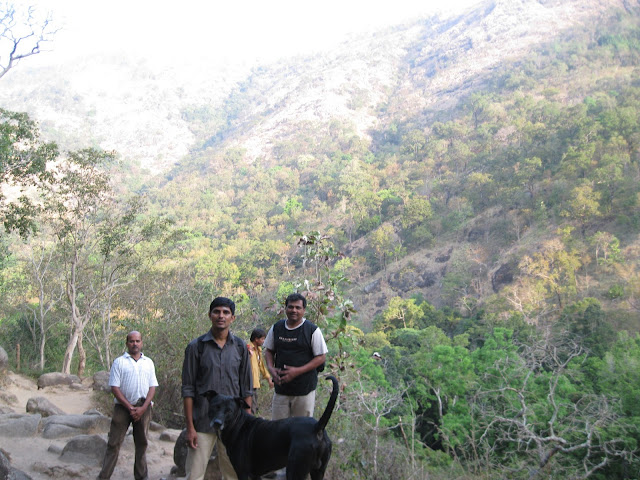 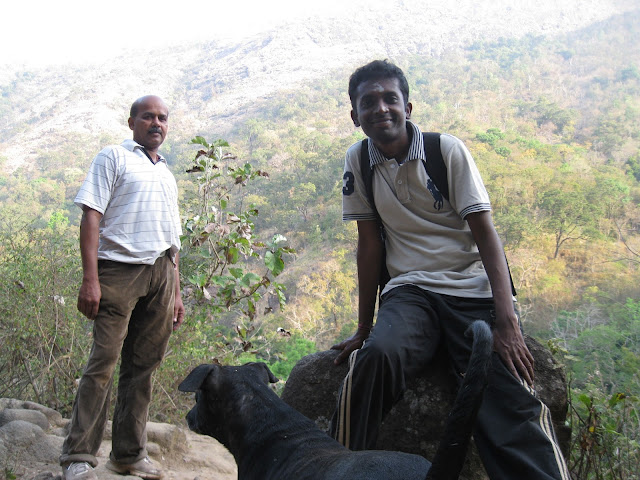 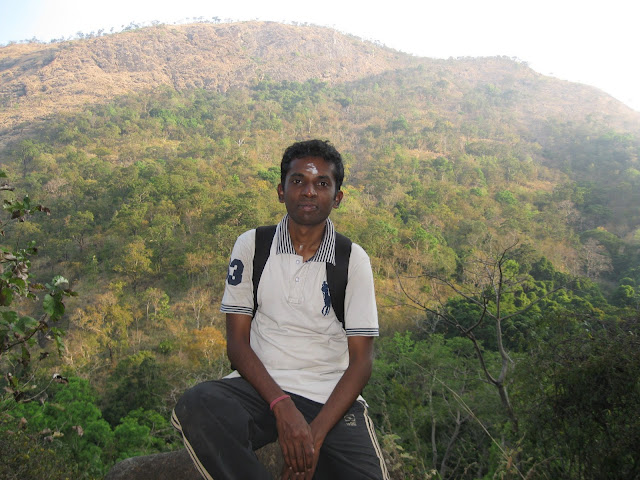 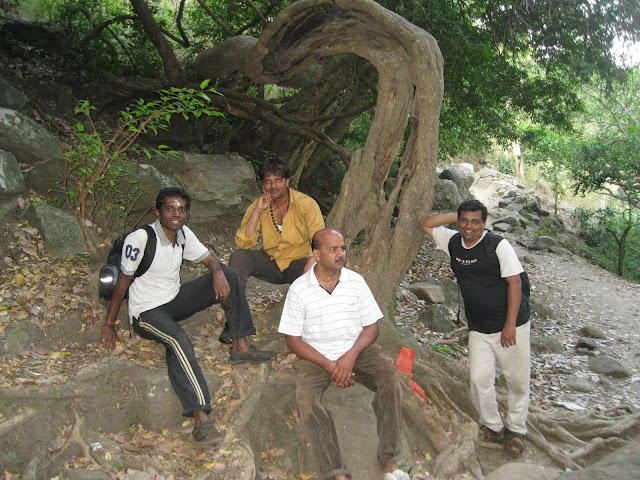 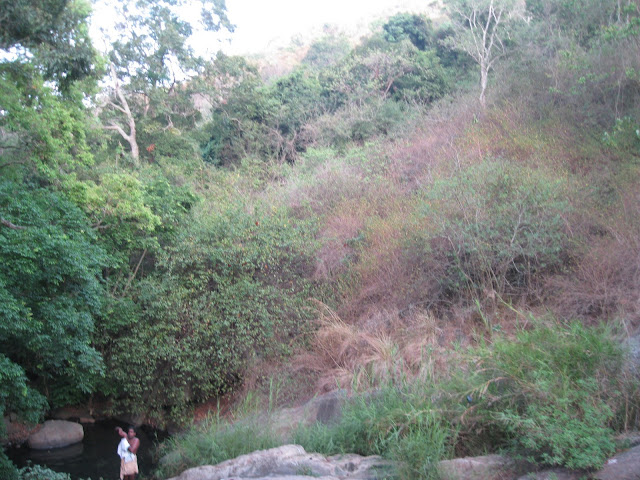 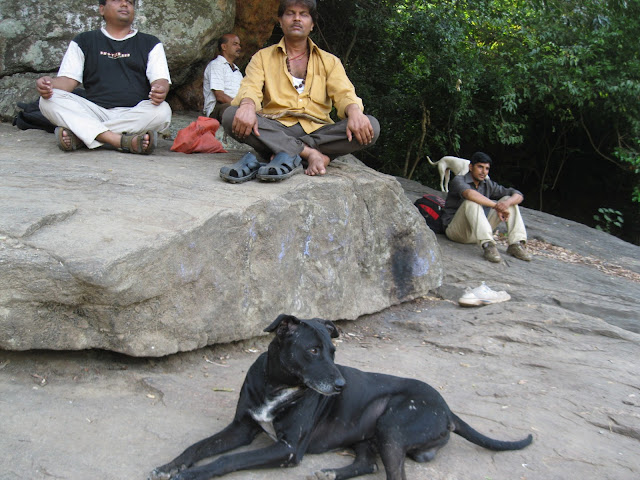 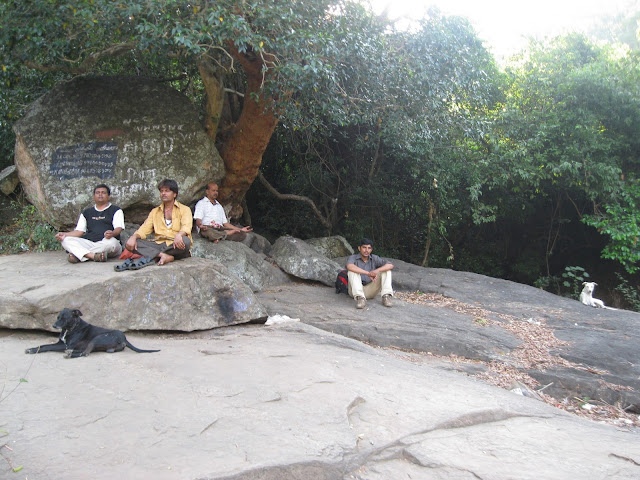 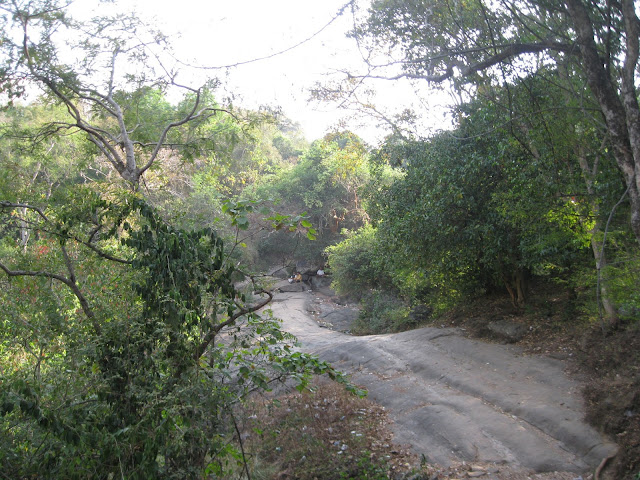 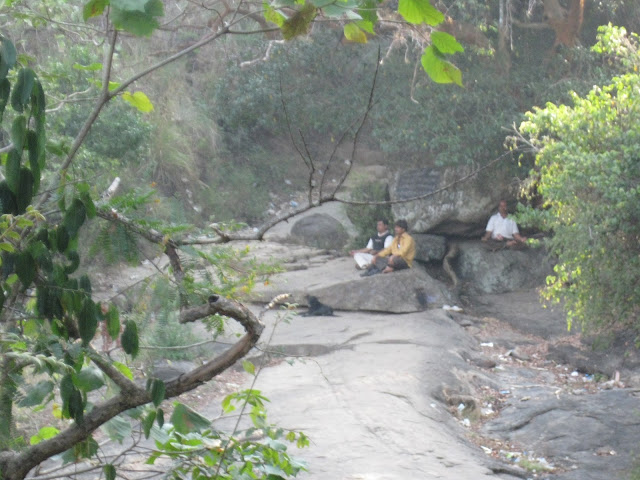 At a certain point, the black dog was joined by a white dog who now also accompanied us. It even led us to certain places "off route" where we could not understand why but i was certain that it was certain to be there.
` 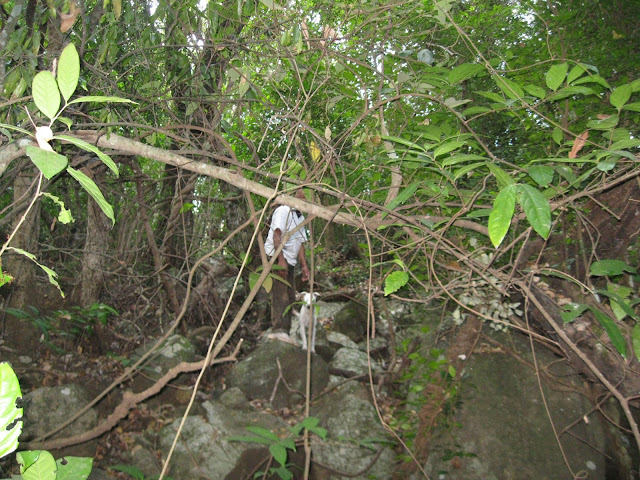 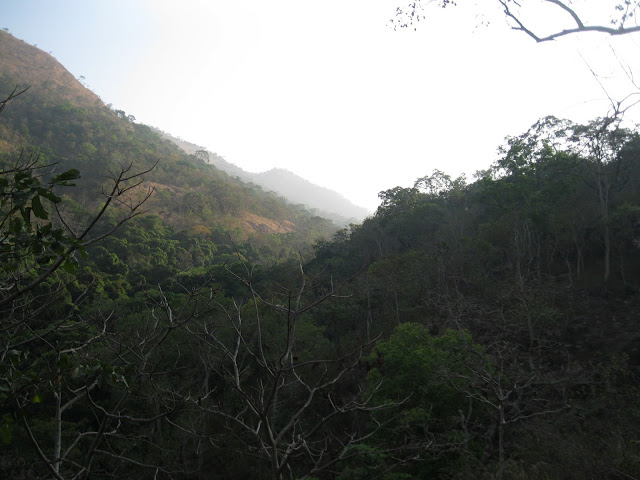 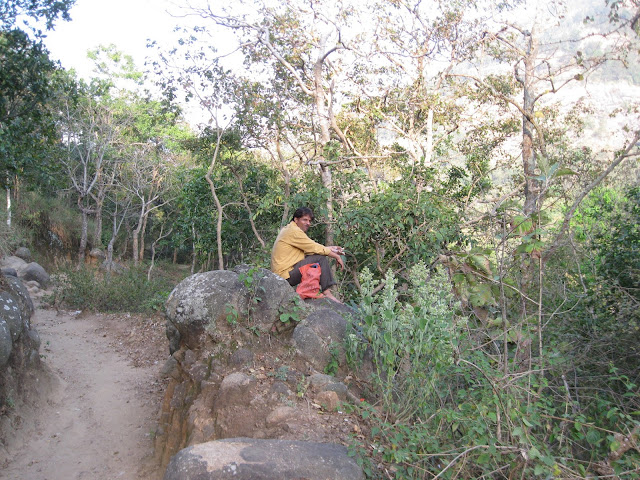 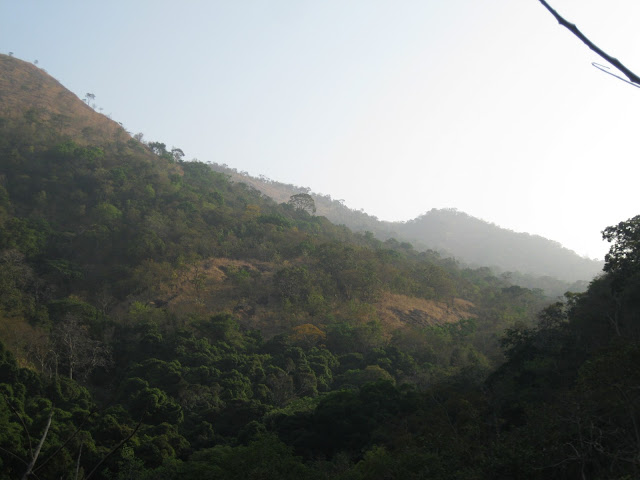 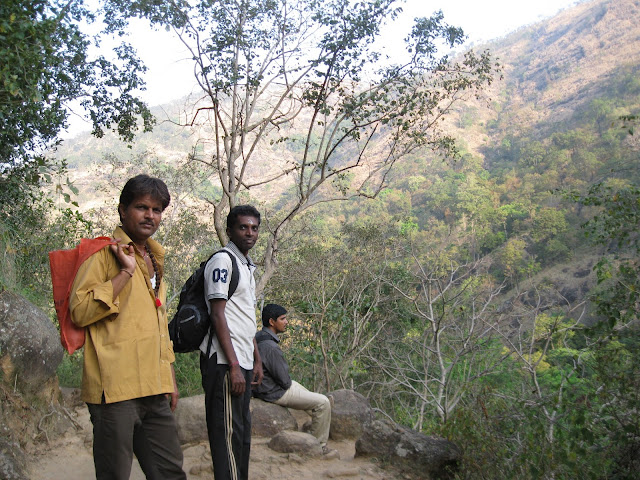 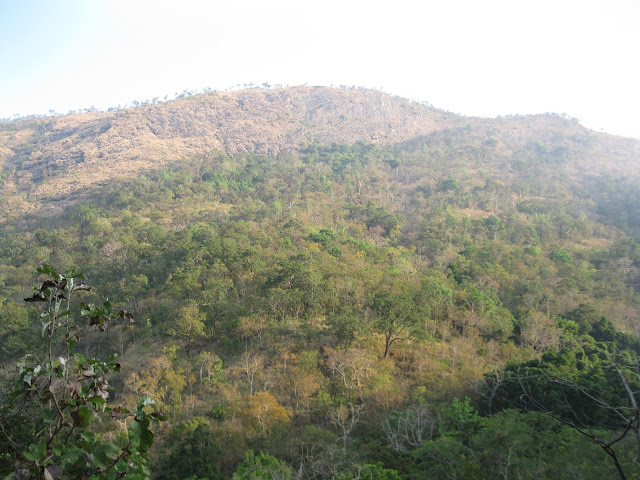 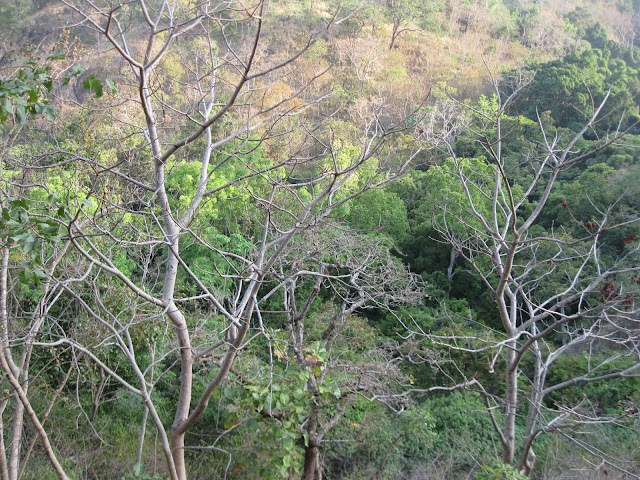 The only thing we had in mind was the Gorakshnath cave that we had read about but could not find yesterday during our climb. Finally, we spotted it which was down into a different steeper location. Here we saw fresh water flowing and had full of thousands of small fishes. Whenever someone dropped their feet into this water all the fishes rushed to the feet and bit off the dead skin. Their tiny bites were ticklish but it was a challenge to take a full dip without being tickled by them. After having a good bath in this holy water we moved towards the low lying cave entrance of the Gorakshnath cave known as Gorakar cave. We meditated here for sometime. Siddha Gorakshnath was known to be one of the most prominent Siddha in Sathuragiri Hills. A magnificent place for spiritual seekers indeed. 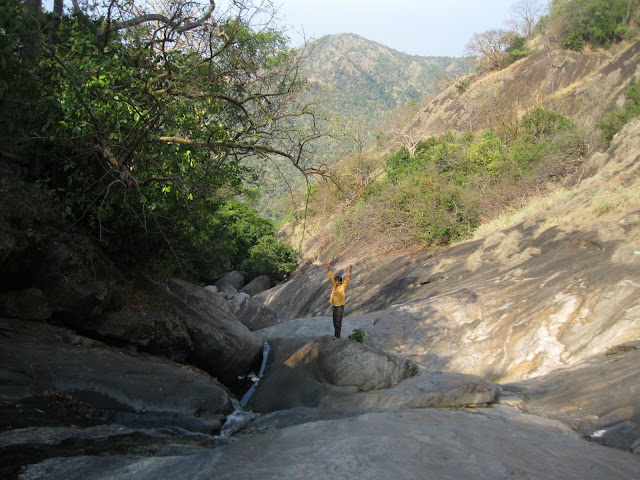 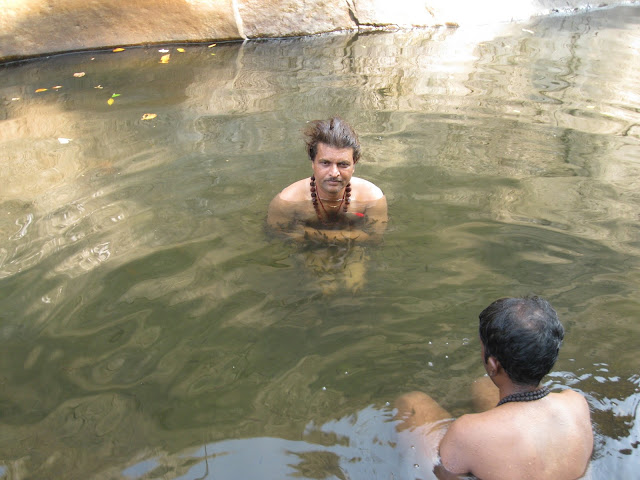 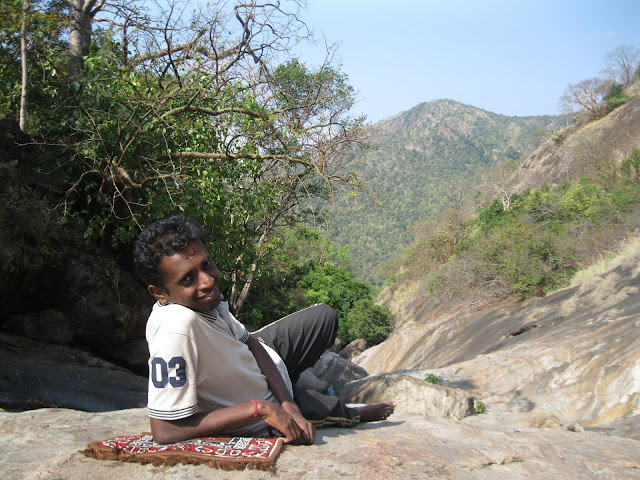 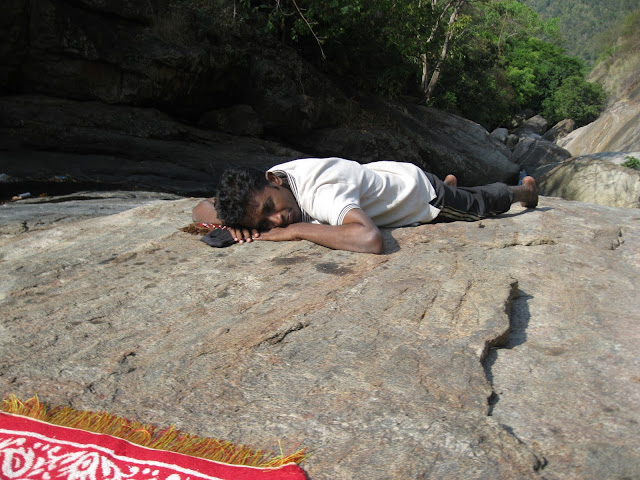 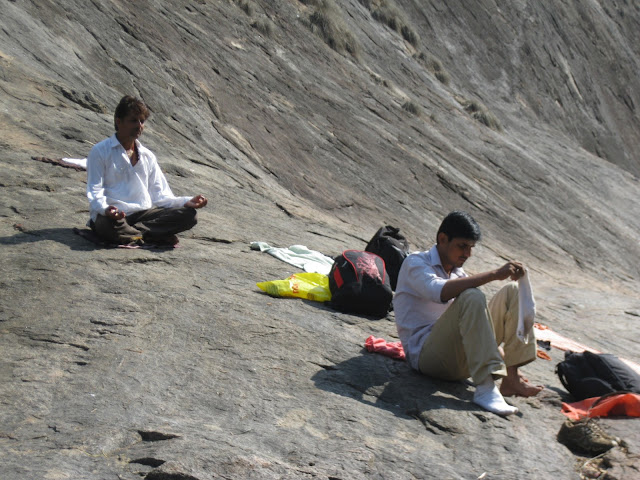 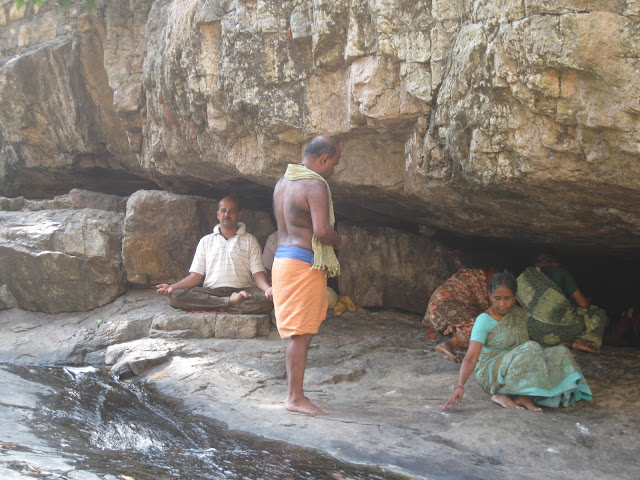 We then left this place and reached Thaniparai, the foothills, from where we had started our journey. It was around 1 pm and we hired a passenger auto straight to Krishnan Kovil, where we had had our breakfast yesterday. We had lunch in a hotel here and got a bus to Madurai. From there we took a bus to our next destination - the Palani Hills of Siddha Bogharnathji.