Reader's discretion advised: This article was written to share my personal experience with yet another Yogi at one point in my life. Every bit of it is written with honesty and there is no exagerration of anything in here. If you feel this topic or article is something related to imaginations, hallucinations, co-incidences, etc then there may be nothing to gain in here but it still may help amuse you for a while. I never have supported or preached about any one religion or rituals but I strongly believe everything is ONE power and thus religion, ritual, place of worship does not create any sort of boundaries in my exposure to witnessing the divinity in everything around. 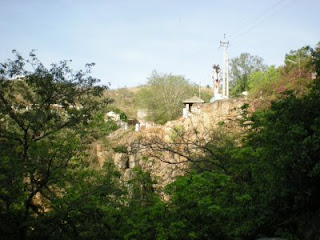 Our purpose: On February 21, 2009, four of us, Suresh Potdar, Shashikant, KP and myself let ourself out on a journey to Sogal Somnath, a place about 75 kms (about 2-1/2 hour journey) from where we stay. Sogal Somnath is a famous place and is flocked by many bhakths (devotees), lovers, and tourists. Bhakths come here because there is a temple here devoted to Shiva and Parvati. Lovers come here because the belief is that Shiva and Parvati wedded here and also because of the romantic natural setting. Tourists because of its cool climate and the high altitude that this temple and forest is. We four were none of the above three categories.
We all had visit 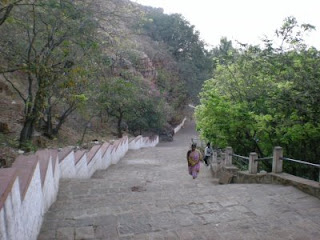 ed this place many times before, mostly as picnic spots but this time we all four had one common reason to come here. It was to meet Mohan Swamy who runs an ashram situated on the same hill. The ashram is situated on top of the rock-mountain carefully paved for the comfort of its visitors. In the ashram is the Sajeeva Samadhi place of two not-famous yogis – Maathanand swamy and Narayanamma. At the highest point of the hill is the cave where Maathanand swamy did his tapas (austerity) before his enlightenment. 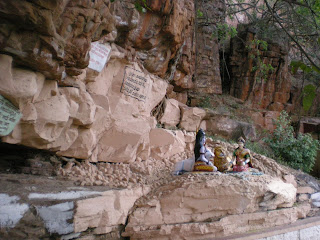 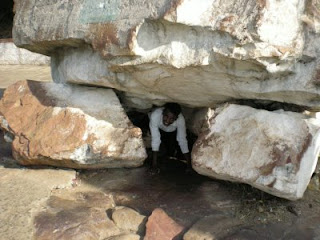 Why it began: We all left  at about 3:30 p.m. on February 21, 2009. Before this journey began I, as usual, never wanted to expect anything from this trip and told myself that I would to open to whatever the Universe is going to manifest unto me with this trip. As all my previous trips I never understood why the trip happened until I found out the meaning of it as days went by. This time too, the experience was great and I was overjoyed to see, witness, experience, learn a lot of things and also unwind the meaning of the trip.
The beginning: We reached Sogal at 5:30 p.m. the same even (that was a 2-hour break journey). As soon as we reached, we had some tea and snacks and made our way uphill climbing the stony path. The hills here were very stony. We reached the temple and did not stop to look around (we had been here many times before) but made our way further uphill to the ashram. On reaching the ashram, we walked up to a temple and also noticed the Samadhi  swamy. Two little cute puppies greeted us. They both were just adorable.
Mohan Swamy: i looked around curiously to see Mohan Swamy and heard Mr. Potdar asking one of his disciples about him, who said that he would come there shortly. As I was taking out the fruits that we brought to offer him, his disciple Prakash said Swamiji is coming. As I looked out, I saw a tall, bearded man in robust health, walking up the steps to the temple towards us. He walked sturdily wearing only a saffron lungi (cloth covering below the waist). He had scarce long hair that curled on his shoulders with a back and grey colored moustache and beard. He walked towards us calmly and looked at us with a smile. Mr. Potdar offered the fruits and we all bowed and touched his feet (a sign of greeting, respect and taking blessings from a holy person). I must admit that I was observing Swamiji and testing him in all ways but at the same time being open and non-judgmental about him. 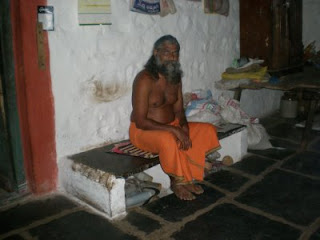 My vibes did match with him as I saw him just being normal and not moved or excited about anything in any way. He asked us to wash our hands and legs and come in for tea. We soon washed ourselves quickly at the tap that was situated outside his small cottage.


We entered the small room that few cloth sheets laid on the floor that indicated was for us. We sat and soon tea and bhandang (made of puffed rice with some chilly powder). It tasted a little old but I could see Swamiji’s love in it. He sat right in front of us and he had his share too with tea. The fruits that we offered we cut and shared with us. He spoke in Kannada and we knew that he also knew Malayalam (my mother tongue) He casually asked us that we were supposed to be there at 5:30 p.m. as per our call to him the previous day on phone. 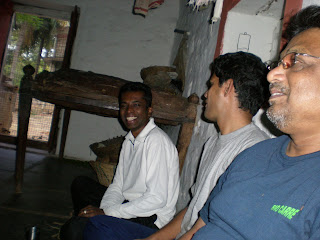 He also told us that we hadn't called him today before coming and Mr. Potdar told him we that it was because we did not want to disturb him. I was knowing keenly that Swamiji had been waiting for us eagerly, which he never ever showed (but it was revealed!) He was lovable as he served us more tea and asked briefly about us all. He was soft in his speech and his flow of speech was at one pace. He never looked like he was running that ashram. His disciples served us earnestly with dedication. What a perfect example of treating guests as God. I had only read about it till now. Though he had disciples around, Swamiji never hesitated to get up and offer us more tea himself. I looked all around in the house and there was a broken cot, two almost-broken cupboards, a few chairs, some vegetables and on the wall were garlanded photos of Swami Maathananda. 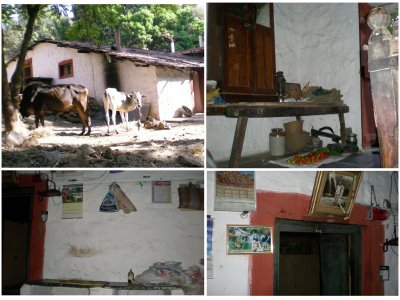 After tea, Swamiji he took us to the Krishi Kendra (an outfit built by the Government for farmers) and this is where he asked us to keep our belongings. He then gently told us that we could sleep wherever we wanted, either here or outside. As we changed our clothes, he waited for us patiently there and then sat down on a carpet. There was a carpet laid before where he sat and we all sat in front of him. There was no account of any time or happening because I had switched off my mobile which also had the clock in it. 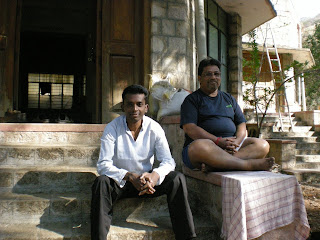 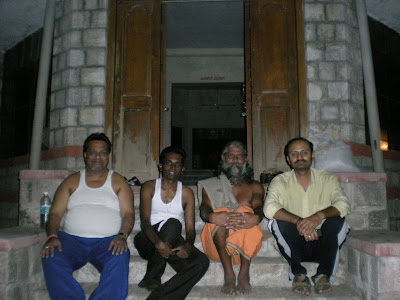 The photos came out clear due to the strong flash. I hesitatingly called Swamiji for a photograph and he immediately came and sat with us on the steps. KP took the snap and said it came out good. Swamiji sounded pleased that it has come good but in contrast to my expectation he just had a glimpse of the pic we showed him on the digital camera but did not look any further keen though he looked pleased at the capture. He observed all that we did silently and then went in. We all then got in and lay down to sleep. Mr. Potdar had cough throughout the night due throat irritation. Due to the change in place or should i say it was some kind of release in such vibrating place. Next morning, we got up and we observed a mysterious thing. We had gone out into the dark being fed up of the mosquitoes and then after Swamiji came in and we got back to sleep, there was not a single mosquito! Whole night then we slept without a single mosquito! Now, if there were no mosquitoes because he mentioned there wouldn't be or if mosquitoes were not naturally around him, is still a mystery.

Read the next part 2

Email ThisBlogThis!Share to TwitterShare to FacebookShare to Pinterest
Labels: Stay in an ashram (Sogal) - 1