As Vijayanand Swamiji had instructed, we got ready by 8 a.m. and had our breakfast with him. Packing our stuff, we spent some time at temple hall. Soon the cab arrived and we set out along with Swamiji and Mallikarjun. After about a half hour drive through the villages and lush green fields, we reached a place called M.K Hubli. We got down at a very, very ancient temple of Narsimha Narayana temple on the banks of the Mallaprabha waters. Swamiji spoke a while with the temple priest and then we proceeded towards a narrow cemented extension that bridged the temple to about 50 feet into the waters. 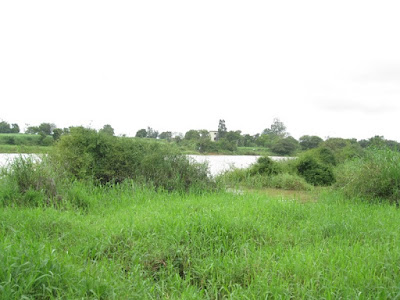 The currents seemed quite swift and as we watched it Swamiji told us that this flows towards north and this is very, very rare that waters flow in the opposite direction where all natural rivers flow north to south. Here was it on the banks of these waters that Maharishi Chavyan did a yagna and tapas. Maharishi Chavyan  was the son of Maharishi Bhrugu who lived some 8000 to 9000 years ago. Maharishi Chavyan  had made the formulation of herbal medicines for the aged and weak. This formulation was called 'Chavyanprash' and this formulation and process of 'Kayakalp' a type of 'skin glowing process' that made Chavyan Rishi look young. 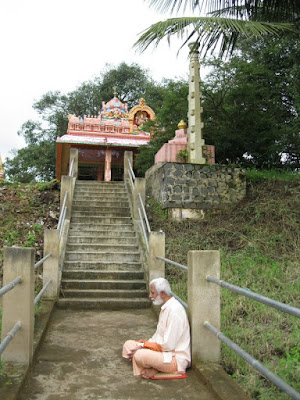 This formulation had become very popular among the people of that period and the same known as 'Chavyanprash' is still very popular and sell in huge quantity throughout India. Swamiji asked us to sit in this narrow place and we sat there along with Swamiji and meditated there. The air was full of divinity and it seemed very easy to get into meditation here that was enough to let know the sacredness of this place. The waters had risen in the rainy season and Swamiji said we would not be able to go there and on talking to the priest about the place of yagna, the priest invited Swamiji and us to come in April and also stay there for a day or two and do sadhana. This temple has entry to males only; that too without shirts. 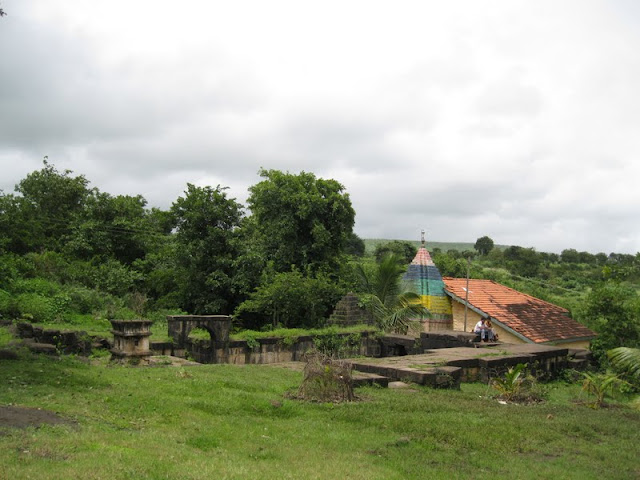 We then got into the cab and headed to Siddhanakolla (meaning Pool of Siddhas) near Markatti village, about  20 kms from here. This place was completely void of any houses and this black stoney area looked to be an area of extreme wilderness but at the same time radiated peace. 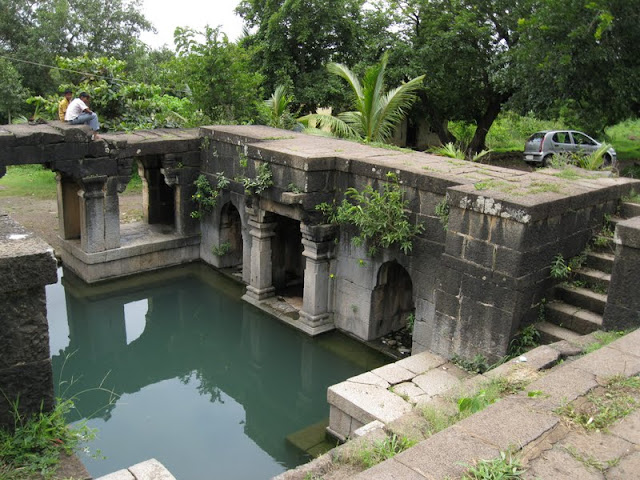 There was an old construction of stone between which was a pool containing clear water. This was said to have been built by a king and it is this pool due to which this place has got this name Siddhanakolla, meaning "Pool of Siddha". Small boys were diving and swimming in it.

Swamiji proceeded straight towards a temple of Shiva and this looked very, very ancient. Swamiji said he had come here almost 20 years back and i could see the delight on his face to have been standing at this place. 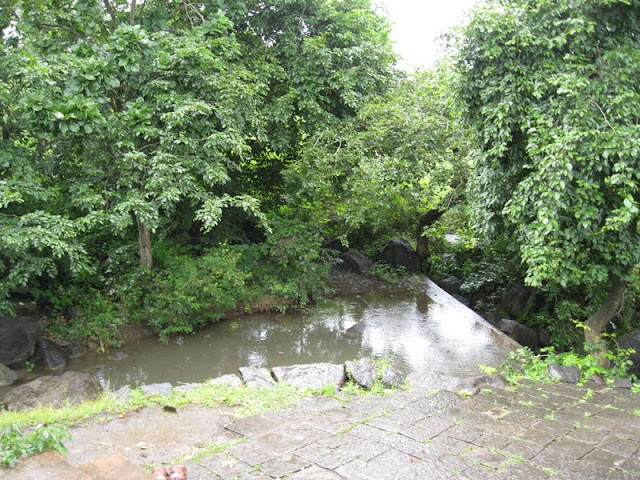 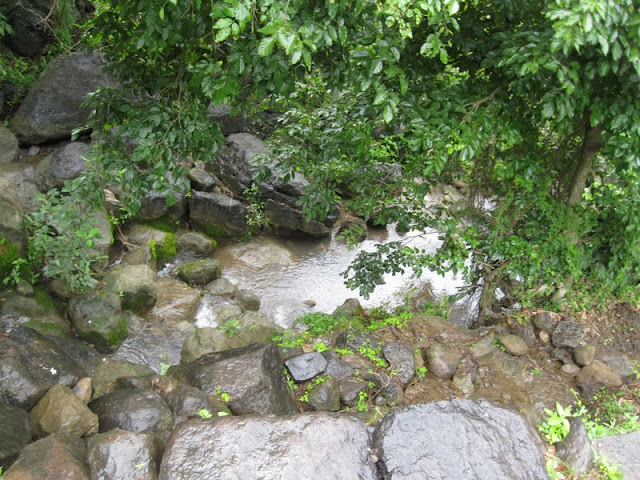 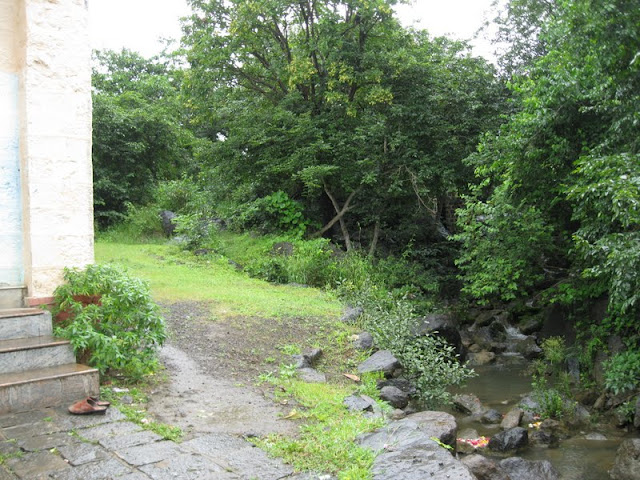 He mentioned that numerous Siddhas actually lived and did tapas in this place. The door was locked and Mallikarjun went to find if someone was there. In the meantime, i took my camera and shot the beautiful scene of gushing waters through heavy rocks and all that one could hear was the roar of water. This place was eternally divine and one could visualize how and why the Siddhas must have chosen this place and lived here doing their austerities. By then, an old village man, who was entrusted to look after this temple came and opened the doors for us and fell at Swamiji's feet. 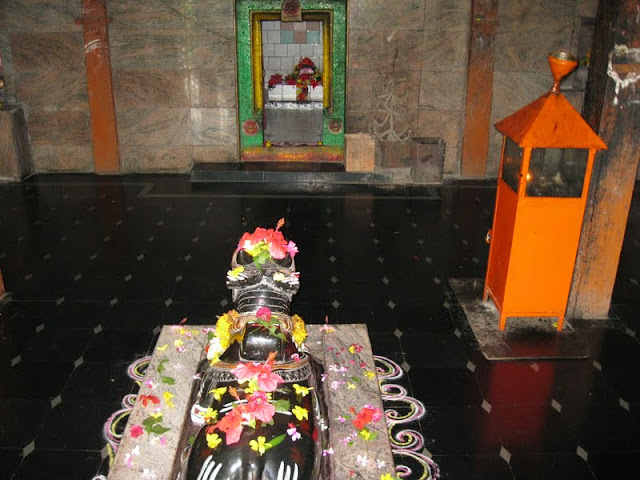 As we entered this ancient temple, it had a huge Shivalinga and a beautiful Nandi. It looked obvious that the original temple was very small but now had a larger construction around it. 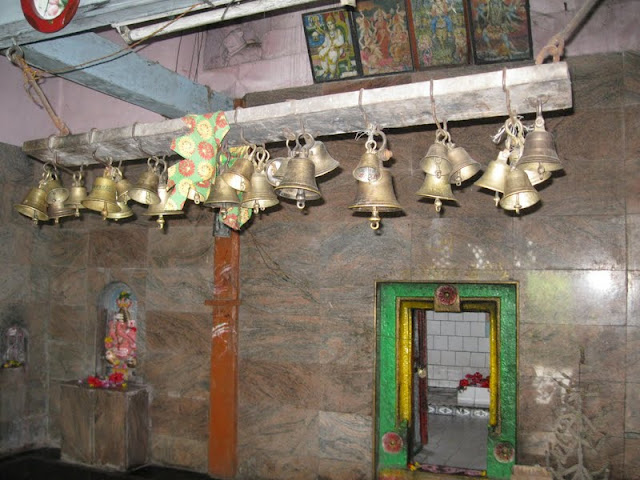 Photos of divine beings were hung all around and in one photo i got a glimpse of the Siddha who lived here. His name was Siddeshwara who lived here more than thousand years ago. Swamiji gave the old man some money to make us some tea, black tea :) We all settled down and spent time in the spacious verandah of the temple. There was so much of serenity around that only the gush of water was heard and this echoed in our ears for very long even after we left this place. There is something very divine in the sound of this water here. It can be heard in a few clips in the video below. The old man, who looks after this place speaks in Kannada and though  old but there is a spark of innocence and total humility in his eyes as he spoke through his toothless mouth. Swamiji suddenly laughed and i was inquisitive to know what the old man said, when he turned to me and said that the Siddha once appeared there to the old man there when he was very young and gave him darshan, gave him pedha (a sweet) and went away. 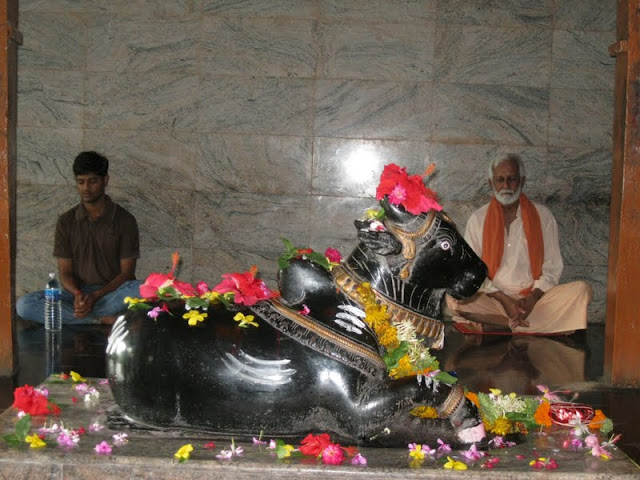 As the old man spoke there was an awe and excitement of love in his eyes for the divine being. He then invited us for tea and we approached the broken building in which he lived. There were photos of many divine beings in his room and the room consisted of very few things that included just a sheet of cloth over which he probably slept. 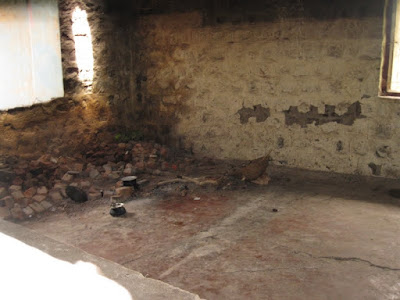 Through a small window i could see his kitchen that had a natural firewood stove of few bricks on which tea was steaming for us. i noticed that there were only three little utensils near a fallen wall of bricks. This is the most ever simplest living i have come across. He was very loving in his hospitality and insisted that Swamiji sit on what looked like a cloth asana-cum-bed and he spread a cloth for us to sit upon. He then tore pieces of newspaper and placed it before each of us that acted as substitutes for plates. Into each piece of paper he put some namkin and asked us to have. As we had, he pulled out steel cups and poured the black tea. 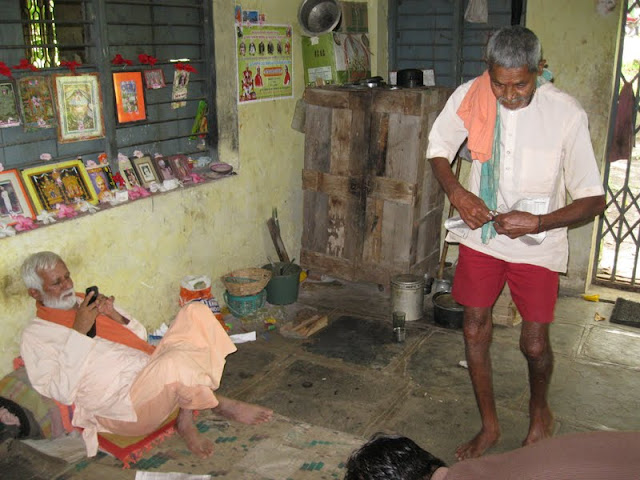 As i sipped i could sense that he had added cardamom to it and it's flavor was a delight. i thanked him for this tea to which he innocently gleamed with a wide shy smile. As Swamiji was attending a phone call, we went out and spotted some worshiped stones and on inquiring we were old that they were samadhis. 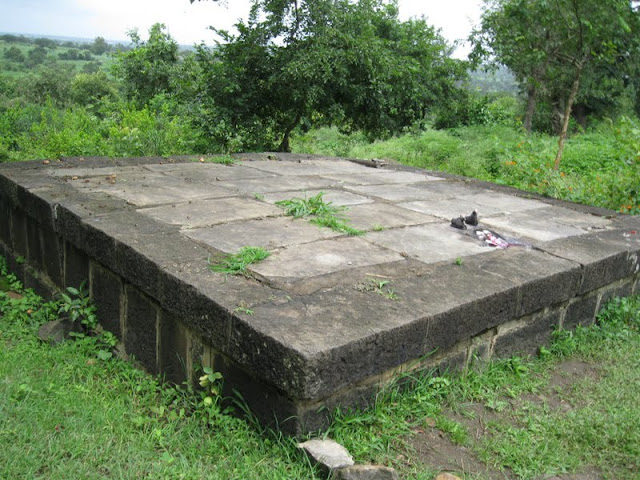 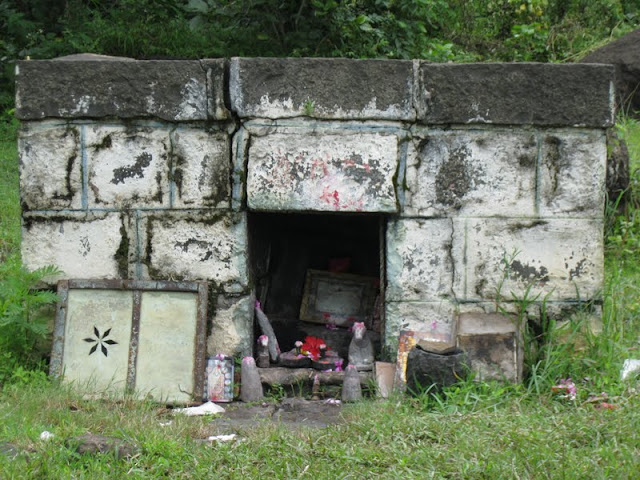 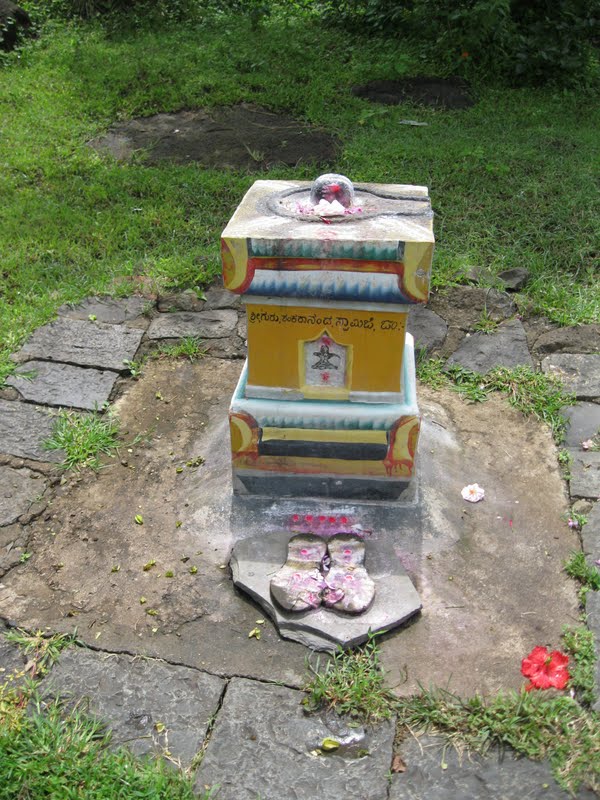 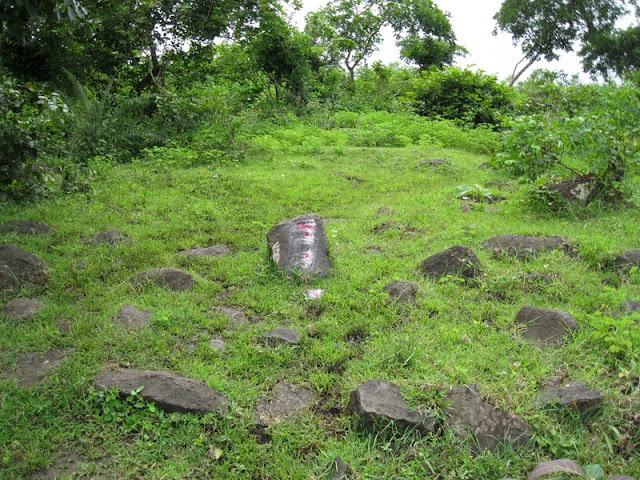 One samadhi, we were told, was of a Siddha who also meditated in Tumkur and took samadhi here. (Later i learnt through the internet that this place in Tumkur is the famous Siddha location called Siddhar Betta, meaning Hill of Siddhas). There were a total of five samadhis that were visible and i am sure that there were many which never had any traces left. All i knew was that we were walking on sacred grounds. After visiting each Samadhi we moved towards the waters among the rocks, where Swamiji had earlier pointed out that he would meditate higher up on those rocks. As we reached we could not hold ourselves back and we climbed those rocks and reached the top. Water gushed down these rocks and these rocks were very slippery. A few clips of these places are in the video below. 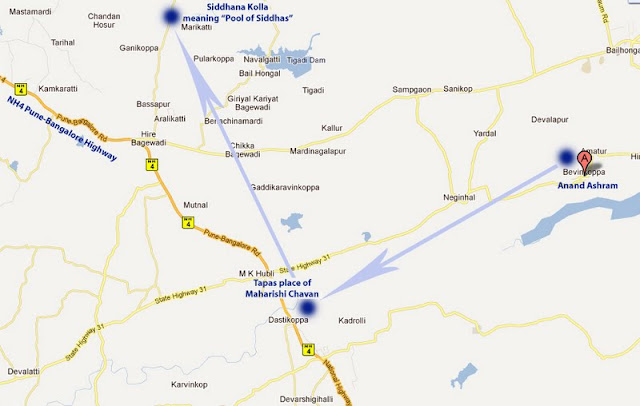 Thanking the old person we left the place. More in next post.

Our sincere gratitude to Vijayanand Swamiji for his precious time and effort to open up these places for us.