Note: All views are entirely the personal views of the author and is shared here with the intent of being useful information to seekers and travelers and those who wish to connect with the essence of what is written. This article is all about Holy Siddhas and thus i am incompetent to talk about anything from those heights but my sincere attempt here is to share whatever is in my capacity. Reader's discretion advised.

This time we happened to be in Anand Ashram, Bevinkoppa, on Guru Poornima Day. There was a function of the release of a Kannada book on Baba Nityananda "Nityanandapradam" by Shri Harikrishna Rao. 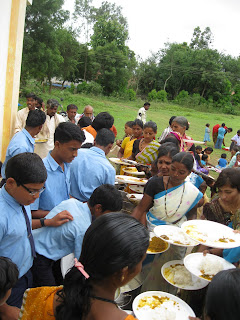 Along with this function, he had organized this time Bal Bhojan for the poor children and people of the village. Also, the ashram was to distribute free raincoats and school bags to the poor school children followed by bhajans of Bade Baba. Next morning, having breakfast, we moved to the Nityananda Dhyan Mandir where there was the morning puja, after which a whole team of musicians and singers sang very beautiful songs of Bade Baba in Kannada, Marathi and Hindi. The aura is the temple was just great with the melodious voices of the devotees accompanied by the tabla and harmonium. During the short break between the program, we meditated in the underground cave that was constructed by Swamji close to a samadhi of a Siddha.

Next morning we woke up at 4:30 a.m. and after freshening up, meditated in the caves. After talking to Swamiji for sometime, we went to the ancient Mallikarjun temple thatis believed to have been established by Maharishi Sumedha by the banks of the Malaprabha river. This place is a 10-minute walk from the ashram. After meditating there at this very ancient Shivalinga temple, we sat for a while under the huge neem tree on the concrete built around it. This is believed to be the Samadhi place of a Siddha. We then walked back to the ashram.

When we reached back, we were happy to hear that Swamiji had arranged to take us to two samadhi sites of two siddhas in close by vicinity. Along with some more devotees from Mumbai and places around, we left in two cars where Swamiji eagerly wanted us to visit.
First, Swamiji took us to the Samadhi Mandir of Siddha Parampujya Shridharananda Swamiji. There is an underground cave where the Siddha did his tapas and above his cave is the Samadhi Mandir. Just opposite to this temple is a Dhyana Mandir that is built as the replica of Dhyana Mandirs of Swami Shivanand Paramahamsa of Kerala. This dhyana mandir had photos of three siddhas - Siddha Shridharananda, Swami Shivanand Paramahamsa and Siddha Maatananda Swami (whose Jeeva Samadhi is in Sogal), where Swami Mohan lives in his ashram. . Now, i could see some good connections :)
The energies were very evident in this place. The Dhyana Mandir is powerful for meditation and so is the house where the Siddha lived. The Samadhi Mandir was very vibrant and we preferred to sit here, which is located above the underground caves that he had done his tapas in. Swamiji allowed us both to sit there and they went to the home of the Siddha, asking us to come there directly after we finished. The home, the samadhi and the dhyana temple are all in one compound. After sitting there for sometime, we then joined Swamiji and others who was sitting in the home of the Siddha. Puffed rice and tea was offered to us all and Swamiji was again stuck in a welcoming formality. I could see Swamiji trying to explain to them that we had to leave and all this was not required, but in vain. Swamiji was made to sit in the Samadhi temple and honored with flowers. As Swamiji stepped down I was giggling looking deliberately at him and Swamiji laughed and said that these things had to be adhered to even unwillingly (for the sentiments of the people). Laughing, we got into the vehicles and left for the next place. 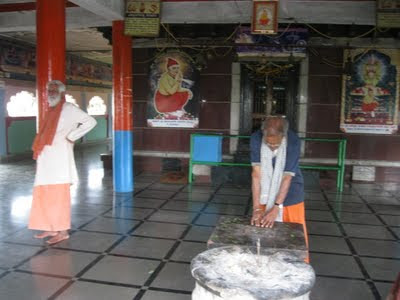 Just a few minutes and we reached another divine place - the samadhi place of Shri Jagadguru Madiwaleshwar. As we moved around this huge place, we looked at paintings hung on the walls depicting the miracles he did. Everything was in Kannada, so it took me some time to read, but then Swamiji quickly narrated some of the Siddha's feats. One of the true incident was of the Siddha who when an emergency struck when ghee got over during the making of puris in  a celebration and the disciples ran to the guru, who asked them to fetch water from the river. No sooner they brought the water and poured into the pan, what poured out was ghee. Next day, the guru asked the disciples if they had bought ghee from the market and given it back to the river, and when the disciples looked surprised, he asked them to do so that nothing comes for free. Returning home, i tried in vain to search about the Siddhas from these areas and unfortunately not a single information about them exists.

It was quite obvious by now how precious this geographical belt was. Swamiji also told me that this is a very divine belt extending from Kanhangad to these areas in North Karnataka. Swamiji humorously told us stories about how saintly people on the path were troubled by people. He told us his own stories but every time he narrated one there sure was something humorous in it and i couldn't help tossing in there with uncontrollable laughter. He too laughed like a child with us.

We reached the ashram by 3:30 p.m. and had food. We left back home the same evening. i never ever imagined that these places here are such divine places, connected with so much of mythology and a Siddha bhoomi. All i knew was that not just these two, there were hundreds of Samadhis in this area,  known and unknown. Our heartfelt gratitude to Swami Vijayanandji, Bade Baba and all holy Siddhas for this opportunity. More continued in the next post.